NONFICTION NOVEMBER: Your Year in Nonfiction 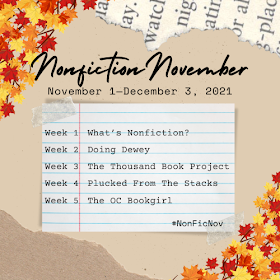 Week 1: (November 1-5) – Your Year in Nonfiction with Rennie at What’s Nonfiction: Take a look back at your year of nonfiction and reflect on the following questions – What was your favorite nonfiction read of the year? Do you have a particular topic you’ve been attracted to more this year? What nonfiction book have you recommended the most? What are you hoping to get out of participating in Nonfiction November?

I read a great variety of nonfiction books this year even though I only read 15 books. The most common type would be a memoir type, but I also read a poetry book, a comic/cartoon book, an historical mystery, a medical mystery, and philisophical physics book.

The top few I read, and the ones that I continually recommended were: 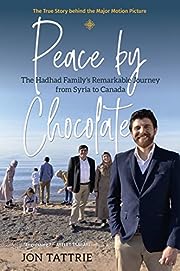 Peace By Chocolate: The Hadhad's Family Remarkable Journey from Syria to Canada by Jon Tattrie

Wonderfully uplifting story of a Syrian family forced to flee during the war in Syria. They luckily get selected to immigrate to Canada and are sponsored by a community group in Antigonish, Nova Scotia. Although they land in rural NS during one of the worst winters and record snowfalls, they fall in love with the community, and vice versa. Looking to make a business, they restart the chocolate business they had in Syria, calling it Peace by Chocolate. Not everything is easy, leaving Syria, and getting resettled in Canada, but the positive attitude of the Hadhad family and the multicultural welcoming community in Canada combine into a happy ending. Made me proud to be Canadian, and I ate a box of Peace by Chocolate while reading. 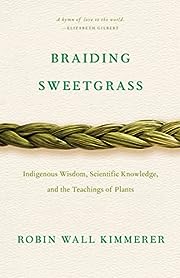 I loved reading Gathering Moss by Kimmerer, it made my best of NF list in 2019, so the opportunity to listen to another book by Kimmerer sounded promising. It exceeded my expectations! Kimmerer combines, as the title imples, her Indigenous background, and her biological background into a wonderful treatise on the environment. Composed mostly of essays and personal narratives, this was long, but I also didn't want it to end. It was just brilliant. Recommended for people who are willing to learn from history and science, and are worried about nature and the environment. 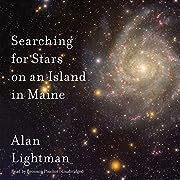 Searching for Stars on an Island in Maine - Alan Lightman

Another science-based nonfiction, this one reconciles the cosmos and physics with religion. Based on an island in Maine, Lightman, an English professor at MIT, has also written on of my all-time favorite books, Einstein's Dreams.  I already knew he was a great writer and able to marry the facts of science with the philosophy of time but this one is almost better.  The faith in God, and the faith in science of an overriding set of rules are compared and admired. It is a book I would like to read again. 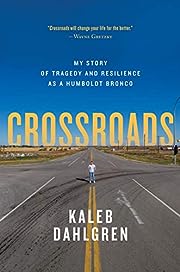 Crossroads: My Story of Tragedy and Resilience as a Humboldt Bronco - Kaleb Dahlgren (ebook)

More inspirational Canadian content, Kaleb Dahlgren seems too good to be true, but after reading Alex Trebek's autobiography, I am beginning to think this is a Canadian requirement. Or else, having a positive attitude, and looking beyond the immediate bad and toward a better future is a characeristic of some successful people. Dahlgren was on the Humboldt Bronco's, a prairie junior hockey team whose bus was involved in a horrific road accident, killing sixteen and injuring thirteen, in 2018. Canadians across the country were devastated, putting out hockey sticks on their front porch in a show of support for the survivrs. Kaleb tells his story of growing up with diabetes and becoming a high level hockey player. He was always positive, working hard and a leader in whatever situation he found himself in. 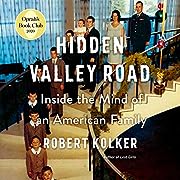 Hidden Valley Road: Inside the Mind of an American Family - Robert Kolker
While a memoir of a particular American family, Hidden Valley Road is also a history of schitzophrenia, both the evolution of an understanding of the disease, and the deveolpment of treatment. The Galvins lived in Colorado and had twelve children - ten boys and then two girls, starting in the 1950s. At first it seems like regular rough-housing boys, but over time the violence  escalates, and eventually, six of the boys were diagnosed with schizophrenia. Kolker was very involved in interviewing most of the family as the two sisters felt it would be helpful for their family to be studied. Even beyond the Galvin's story, the history of studying schizophrenia was very interesting. 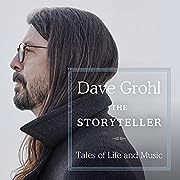 The Storyteller: Tales of Life and Music - Dave Grohl
I kind of missed Nirvana as I am a little older than their demographic and the Foo Fighters were never a band I followed but this book by Dave Grohl was so interesting! I became a Grohl fan for sure, and spend quite a bit of time after the book looking up videos with Grohl. Although I wasn't listening to Nirvana, Grohl is around my age, so all the cultural markers in the book were identifiable, we just didn't listen to the same music. Except, I completely remember seeing the B-52s on SNL live the same night he did. Little boring me couldn't believe or understand them, but for Dave seeing them was life-changing. He was always into music and had the best mom, who he writes lovingly about. She gives him permission to leave high school and go on tour with a punk rock band called Scream. And after that, he just keeps following his dreams.
While this seems like it would be about sex, drugs and rock and roll, it really just covers the latter. Grohl was a pretty stable guy considering the life he has led. There's a touch of Forest Gump, as he meets up and is in the right spot so many times with so many famous people. But his philosophy of going for it and taking risks are why he ends up where he does.